by Clora Fetzer
in Technology
Reading Time: 2 mins read
A A
45
SHARES
279
VIEWS
Share on FacebookShare on TwitterShare on Linkedin 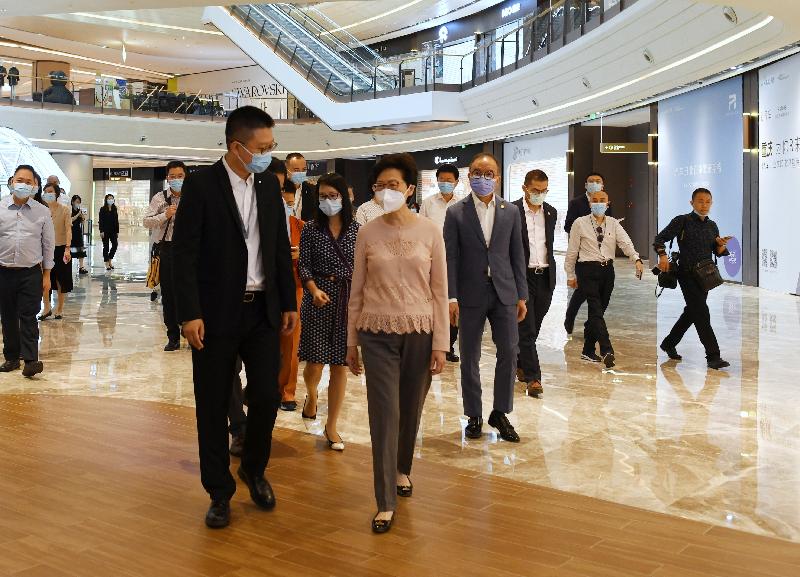 The Chief Executive, Mrs Carrie Lam, continued her visit to Chongqing today (September 25), during which she visited enterprises and various facilities to learn more about the latest developments of the city.

In the morning, Mrs Lam, accompanied by the Secretary for Constitutional and Mainland Affairs, Mr Erick Tsang Kwok-wai, visited a Hong Kong investment project, the Ring. The project, officially opened in April this year, comprises a shopping mall, retail streets, Grade A office buildings and an indoor botanic garden, integrating the natural ecosystem into the business experience with the concept of sustainable development. Noting that Hong Kong is the largest source of external investment in Chongqing, Mrs Lam said she was pleased to see that Hong Kong enterprises have attached more importance to high-quality development in their investments in Chongqing in recent years, enhancing the charm of Chongqing as a city. She said that along with the establishment of the Chengdu-Chongqing Economic Circle, Hong Kong enterprises are set to be presented with more business opportunities in Chongqing, strengthening the mutually beneficial relationship between the two sides.

Mrs Lam and Mr Tsang then visited the China Automotive Engineering Research Institute and viewed demonstration of the automatic braking system, automotive wind tunnel testing and simulated traffic accident testing. The automobile manufacturing industry is a traditional heavy industry in Chongqing. During the visit, Mrs Lam learned more about automobile technology and the business of industrialised production of the institute, including the establishment of the country’s first 5G autonomous driving public service platform to advance the development and application of the relevant technology.

Next, Mrs Lam and Mr Tsang visited the Lijia Smart Park in the Liangjiang New Area of Chongqing, including an exhibition gallery to promote smart home and smart office and an exhibition showing artworks presented with digital technology. She also visited the Liangjiang Industrial Internet Experience Centre to learn more about the industrial Internet developments in Chongqing. As the first national-level inland development area in the Mainland, the Liangjiang New Area’s functions and positioning include being a base for modern services industry, and a financial centre and an innovation centre in the upstream Yangtze River region. Pointing out that Hong Kong has advantage in the high-end services industry, she expressed the hope that Hong Kong enterprises and professionals can further participate in the development of the Liangjiang New Area in the future.

In the afternoon, Mrs Lam and Mr Tsang visited the Chongqing Planning Exhibition Gallery to know more about the planning and infrastructure in different districts of the city. Before concluding their full-day visit programme, they visited the Chongqing Hongyan Revolutionary Memorial to learn more about the efforts of members of the Chinese Communist Party there, with this year marking the 100th anniversary of the founding of the Communist Party of China. Mrs Lam also gave interviews to the local media.

Mrs Lam will depart for Xi’an tomorrow (September 26) to continue her visit itinerary.