by Steve Kaaru
in Blockchain
Reading Time: 4 mins read
A A
45
SHARES
279
VIEWS
Share on FacebookShare on TwitterShare on Linkedin 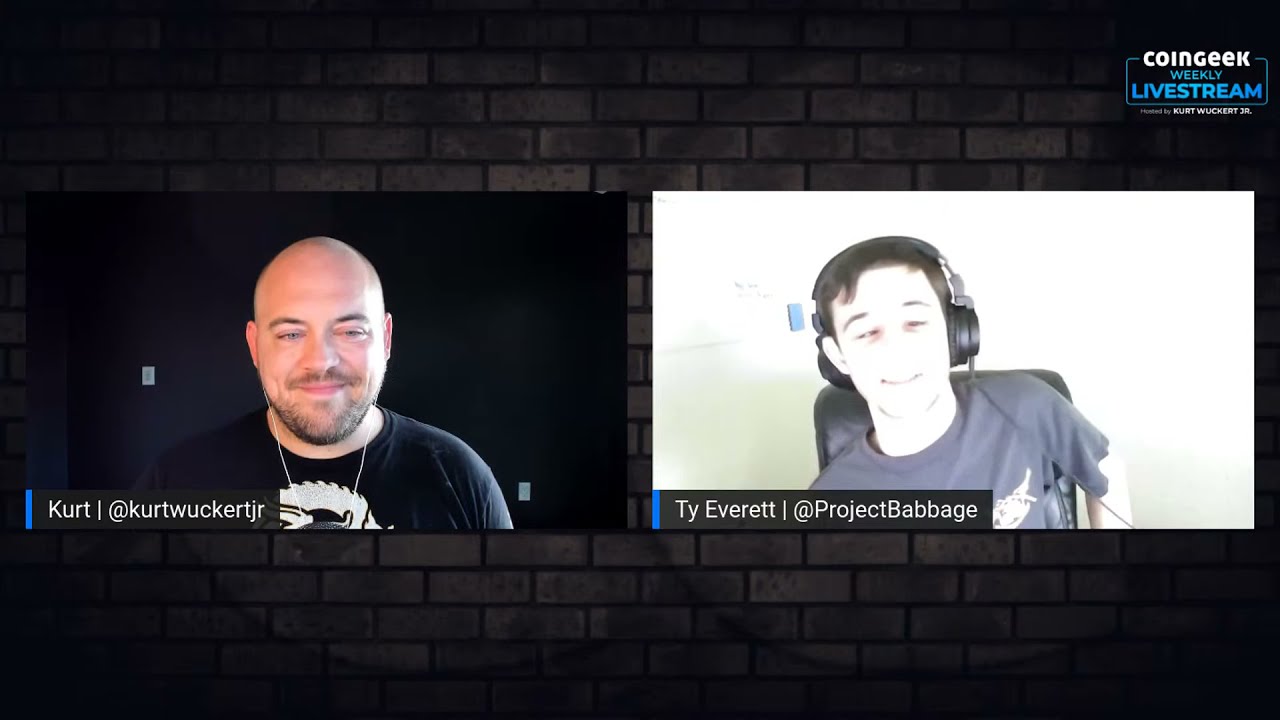 After weeks of hosting shows focused on the Kleiman v Wright trial, Kurt Wuckert Jr. is back to hosting the regularly-scheduled CoinGeek Weekly Livestream this week. Broadcasting from his new studio, Kurt hosted Ty Everett, the founding president of Project Babbage, who talked about how his platform is allowing developers to build easily on Bitcoin, his interaction with Satoshi Nakamoto, and claims that he was getting pushback on account of his project being a layer two platform.

Everett joined the Bitcoin space in 2016, and as with many others, the price rise of BTC attracted his attention. He got quickly hooked and started exploring other opportunities in Bitcoin, as he revealed to Kurt. Following the Bitcoin civil war and the hard fork, he followed Satoshi into Bitcoin SV, whose unlimited block sizes offered vast opportunities.

For Everett, the first opportunity that caught his eye was micropayments on Bitcoin.

“What if I could write an article and then people who have read that article could send micropayments to me as the author, and then the next micropayment would go not only to me but also the people that have tipped me previously?” said Everett.

As Everett’s developer skills became better, his interest in building tools that helped onboard more people to the Bitcoin space grew as well. This culminated in Project Babbage, which Everett described to Wuckert Jr. as “a framework for building Bitcoin apps.”

We need to build applications on Bitcoin—that much is clear. And according to Everett, one of the reasons is because, in the current Internet system, every other company has its secluded data silos, with the result being users having dozens of accounts, passwords, and identities to maintain.

“If apps were able to log into people, instead of people logging into apps, then the data could be owned by the individual instead of by all these platforms.” And once you introduce a micropayment incentive around that, you provide existing apps with a great reason to move to Bitcoin. This vision of pay-per-use was what many thought the Internet would grow to be back in its formative years.

No matter how noble the purpose, any protocol or application built on Bitcoin has to have a way of generating income. For Babbage, the revenue stream lies in running the Bridgeport servers.

“An app can come to me as the person running the Bridgeport server and pay me to run the Bridge that tracks [any] particular subset of the blockchain and puts it on a database in a deterministic way,” he said.

For Babbage to become a success, it needs users to run its servers. Transactions processors such as GorillaPool and TAAL Distributed Information Technologies Inc. (CSE:TAAL | FWB:9SQ1 | OTC: TAALF) are best suited for this, but Everett believes that the entire space will get onto it and run Babbage servers in due time. He compared the dynamic to Amazon Web Services, which seemed to have a de facto monopoly on cloud services until Google Cloud, Microsoft Azure, and others popped up.

Babbage serves as an overlay network on Bitcoin, similar to the tools that Unwriter used to make before seemingly stepping back from the space. Everett took a lot of inspiration from Unwriter in his work, he revealed to Wuckert Jr.

“In fact, some of the tools that I’ve worked on are derived from Unwiter’s set of tools,” Everett noted.

On how to get started on Babbage, Everett revealed that he built the platform with JavaScript, making the language an essential skill for anyone who wants to build on Babbage. “I like React, but probably my tools can be used with UJS, or Angular […] but my packages are on npm on the Node.js package manager.”

The current Bridgeport node that Everett is running spots MongoDB. In the medium term, he plans to support SQL as another derivable database that users can pull from the blockchain, and eventually Neo4j as well.

Everett has interacted with Dr. Craig Wright and looks to run any new development by the man who created Bitcoin, he revealed. He recently sent Dr. Wright a paper looking into ‘Computing with Integrity’, which the veteran cryptographer said “was really cool but would need a lot of work to make it happen.”

And as with many other Bitcoin apps and protocols, Babbage allows you to earn BSV. Developers who build applications on the protocol can set up ‘commissions,’ which allow them to charge users in satoshis for using the app.

Despite being relatively new, Babbage has received some pushback from some members of the Bitcoin community on account of it being a Layer 2 protocol. And while he acknowledges the need for having data on-chain, he believes that not everything can be put on Bitcoin, at least not from an economic point of view. However, Babbage allows developers to incentivize particular parties to provide the service of storing data that hashes to a certain value.

As Wuckert Jr. noted, this comes with its drawbacks, but it all depends on the data. For instance, if someone wants to share a movie, they don’t really care about immutability and can use the Babbage model of off-chain storage with an on-chain hash. However, no matter how big, some data has to be stored on-chain. A prime example is a former Jeffrey Epstein sex slave who, after finding no publisher wanted to publish her book, decided to put in on Bitcoin, using Canonic.

Struggling Prices Beats Bitcoin Expectations Down From $100K To $50K